There's sometimes a bit of confusion about what is QMK and VIA, as well as how they relate to each other. Hopefully after reading through this, we'll get you sorted out on what's what and how it applies to your keyboard.

Before we dive into what VIA is, let's go over what QMK Firmware is first in case you're not sure. QMK Firmware is an open-source keyboard firmware, and most keyboards within the mechanical keyboard community use QMK. QMK also encompasses a suite of other tools, such as QMK Configurator and QMK Toolbox.

All of the keyboards released by Keebio so far have QMK support, and Keebio is involved with the QMK organization as a collaborator.

What is VIA, and how does it relate to QMK?

So when dealing with QMK normally, if you want to update your keymap, you modify your keymap code within a QMK build environment and compile it or use something like QMK Configurator. In either case a .hex/.bin file is generated that then needs to be flashed/reflashed to your keyboard. Setting up a QMK build environment can be a bit complicated for some people, and while the QMK Configurator helps make this process easier, sometimes flashing a board with firmware can be tricky as well.

This is where VIA steps in. VIA is a feature in QMK that lets you change your keymap on your keyboard without needing to reflash firmware. The changes you make using VIA remain persistent on the keyboard, so even when you unplug and replug your keyboard back in, the keymap settings still remain.

VIA consists of two parts: Firmware and VIA Configurator.

VIA Configurator is a desktop app that talks to your VIA-enabled keyboard and allows you to remap keys on-the-fly, as well as toggling layout options, programming macros, and controlling lighting.

The ability to change rotary encoder keycodes is also not currently present in VIA.

Keyboards with VIA Support

Here's a list of keyboards with VIA support: Supported Keyboards. Note that just because your keyboard is listed there doesn't mean that you can immediately use VIA Configurator with it. The firmware flashed to the keyboard must have VIA support enabled, and you can find pre-compiled .hex/.bin firmware files with VIA support here: VIA Firmware Downloads.

Adding VIA support to a keyboard

Adding VIA support to a keyboard is not particularly straight forward, but if you are interested in doing so and have good working knowledge of QMK, checkout MechMerlin's videos on his efforts to add VIA support to various boards. 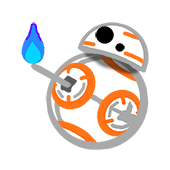 Last updated 4 weeks ago
Edit on GitHub
Contents
What is QMK?
What is VIA, and how does it relate to QMK?
Normal QMK Usage
QMK with VIA
Parts of VIA
VIA Limitations
Keyboards with VIA Support
Adding VIA support to a keyboard